Benefits of Eating Dark Chocolate : You must have probably heard others talk about the benefits of eating foods packed with nutrients and antioxidants as a way to promote overall health.

I would be willing to bet that chocolate, and more specifically dark chocolate, has come up in these conversations. While it seems almost too good to be true, the health benefits to eating a moderate amount of dark chocolate are backed by science. So rest assured, this is one instance where you can have your cake (or in this case, dark chocolate) and eat it too. 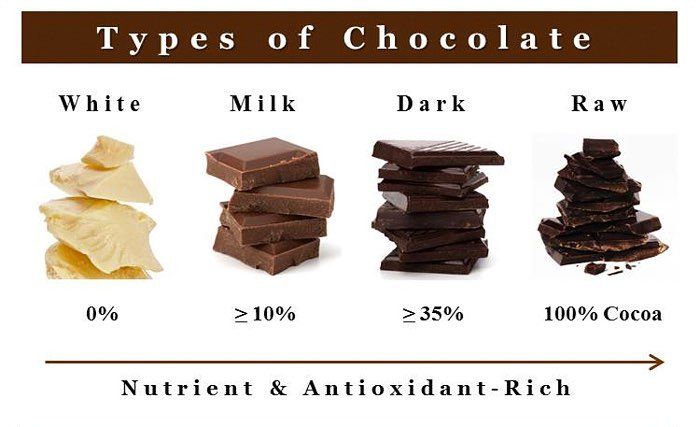 1.) For centuries, dark chocolate has been long been associated with health benefits :

Incas referred to a beverage made from cocoa as “the drink of the gods”, which eventually gave rise to its scientific name Theobroma cacoa, derived from the Greek words theo (god) and broma (drink). Aztec Emperor Montezuma stated that cocoa “builds up resistance and fights fatigue” and can “permit a man to walk for a whole day without food”.

2.) Dark chocolate is rich in a class of phytonutrients called flavonoids :

Flavonoids are one of the most common and largest groups of phytonutrients found in the diet. These phytonutrients are chemicals found in plants that promote health To date more than 4,000 varieties have been identified.

3.) Dark chocolate is chock(olate) full of other nutrients :

It is also important to note, that a serving of dark chocolate contains 300 calories, so it is best to consume dark chocolate in moderation. And don’t worry! You can still get these healthy effects from smaller servings; just try to make sure you are eating dark chocolate that 70-90% cocoa.

Research has shown that after consumption of dark chocolate, antioxidant capacity in blood increased, which led to the opening of blood vessels and decreased blood pressure.

You may have heard LDL, HDL, or VLDL. But what does this alphabet soup mean to your cholesterol and overall health?

LDL is considered the “bad” cholesterol that can build up on the walls of arteries, while “HDL” is called the good cholesterol, which can block LDL from building up on arteries. A variety of studies have shown that both dark chocolate and cocoa powder reduced LDL and oxidized LDL levels and increased HDL levels.

*Platelets are components found in blood cells that help to form clots.

While *Clots are critical in stopping excessive bleeding, hyperactive platelets can contribute to coronary heart disease.

Checkout, This 12 Foods Powers The Memory and Keeps Brain Healthy

7.) Risk for cardiovascular disease is slashed by dark chocolate :

Points #4-6 may be all well and good, but does dark chocolate broadly impact hearth health? Turns out, it does.

A study researching the long-term diet habits in nearly 500 elderly men revealed that cocoa intake was inversely correlated with cardiovascular disease and mortality rates that were assessed 15 years after the study began.

What about stroke? An analysis of five different studies demonstrated a nearly 20% stroke risk reduction when comparing those defined as high consumers (~ 62.9 grams/week or a tenth of a pound for our non-metric friends out there) to those defined as low consumers of dark chocolate (~ 0 grams/week).

Unfortunately, diabetes is a growing concern in the United States, so wouldn’t it be great if dark chocolate could mitigate rates of diabetes?

An analysis over 40 clinical trials, including nearly 1300 participants, found that nutritional interventions with cocoa or chocolate significantly reduced fasting insulin concentrations and insulin resistance, endpoints which are used to assess risk for the development of diabetes and cardiovascular disease.

But does blood flow translate into smarts? I’m so glad you asked, see the next point.

A study in 90 elderly participants investigated the effects of a high (~990 milligrams), intermediate (~520 milligrams), or low (~45 milligrams) cocoa flavanol doses.

Researchers found that participants on the high flavanol track were able to complete cognitive tests much faster and scored better on verbal fluency test scores in comparison to those assigned to low flavanol supplementation.

So you are telling me that dark chocolate could make me smarter? Sweet.

This list just gets better and better. Personally, I feel like a weight has been lifted off my chest and this next point only helps this feeling.

Preliminary studies demonstrate that dark chocolate consumption reduced excretion of cortisol and catecholamines, hormones involved in the body’s stress response. Additionally, other researchers have shown that consumption of dark chocolate buffered stress responses and reduced levels of perceived stress as assessed through a stress questionnaire.

Now it makes even more sense to keep a bar of dark chocolate at work.

I am always looking for an alternative pick me up to my traditional afternoon cup of coffee. Dark chocolate contains a small amount of caffeine to help give you a boost during the mid-afternoon slump.

14.) Flavanols from dark chocolate can protect the skin :

Just in time for summer! Consumption of flavanol rich chocolate protects against UV rays by increasing the minimum amount of UV rays required to cause skin redness.

Moreover, flavanols from cocoa improve blood flow to the skin and increases skin hydration and thickness.

Sparkle up that smile. Dark chocolate is rich in the antioxidant theobromine, which has been shown to protect the enamel surfaces of teeth. Additionally, this potent antioxidant is better than fluoride at remineralizing and hardening tooth enamel. Knowing these facts can only put more smile on your faces i guess.

As you can see, the health effects of dark chocolate are supported by science and exhibit how dark chocolate and cocoa broadly promote health. Even though I am a dark chocolate lover already, reading over this list has only further convinced me to pick up another bar the next time I am grocery shopping to enjoy this treat.

Since you already have your minds filled Dark Chocolate, check out this other articles on Esupreme Search…